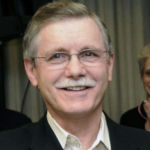 Why Is Ron Gettelfinger Influential?

According to Wikipedia, Ronald A. Gettelfinger was the president of the United Auto Workers from 2002 to 2010. Gettelfinger started his union involvement in 1964 in Louisville, Kentucky, at the Louisville Assembly Plant run by Ford Motor Company while working as a chassis line repairman. The workers at Ford's Louisville Assembly plant elected Gettelfinger to represent them as committeeperson, bargaining chair and president. He was elected president of local union 862 in 1984. In 1987, he became a member of the Ford-UAW bargaining committee.

Other Resources About Ron Gettelfinger

What Schools Are Affiliated With Ron Gettelfinger?

Ron Gettelfinger is affiliated with the following schools: