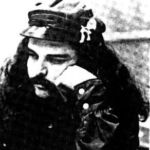 Why Is Ron "Pigpen" McKernan Influential?

According to Wikipedia, Ronald Charles McKernan , known as Pigpen, was an American musician. He was a founding member of the San Francisco band the Grateful Dead and played in the group from 1965 to 1972. McKernan grew up heavily influenced by African-American music, particularly the blues, and enjoyed listening to his father's collection of records and taught himself how to play harmonica and piano. He began socializing around the San Francisco Bay Area, becoming friends with Jerry Garcia. After the pair had played in various folk and jug bands, McKernan suggested they form an electric group, which became the Grateful Dead. He was the band's original frontman as well as playing harmonica and electric organ, but Garcia and bassist Phil Lesh's influences on the band became increasingly stronger as they embraced psychedelic rock. McKernan struggled to keep up with the changing music, causing the group to hire keyboardist Tom Constanten, with McKernan's contributions essentially limited to vocals, harmonica, and percussion from November 1968 to January 1970. He continued to be a frontman in concert for some numbers, including his interpretations of Bobby Bland's "Turn On Your Love Light" and the Rascals' "Good Lovin'.

Other Resources About Ron "Pigpen" McKernan