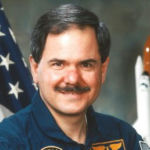 Why Is Ronald Parise Influential?

According to Wikipedia, Ronald Anthony Parise was an Italian American scientist who flew aboard two NASA Space Shuttle missions as a payload specialist. Parise was born in Warren, Ohio to Henry and Catherine Parise . By age 11, he became a licensed amateur radio operator. In his teens, he developed an interest in astronomy and aviation and became a pilot. He attended Western Reserve High School, graduating in 1969 before attending Youngstown State University. In 1973, he obtained a bachelor of science degree in physics, with minors in mathematics, astronomy, and geology. He went on to receive a master's degree in 1977 and a doctorate in 1979 from the University of Florida, both in astronomy. He and his wife Cecelia Sokol Parise had two children.

Other Resources About Ronald Parise

What Schools Are Affiliated With Ronald Parise?

Ronald Parise is affiliated with the following schools: