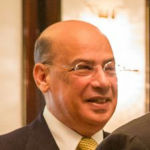 Why Is Ronald Sanders Influential?

According to Wikipedia, Sir Ronald Michael Sanders is an Antiguan Barbudan diplomat, academic former broadcast-journalist, and the current Ambassador Extraordinary and Plenipotentiary to the United States and to the Organization of American States since 2015. He is also the non-resident High Commissioner to Canada since 2017. He served twice as Antigua's High Commissioner to the United Kingdom as well as ambassador and negotiator to the World Trade Organization . He was a member and Rapporteur of the Commonwealth Eminent Persons Group that produced a seminal report entitled, A Commonwealth of the People: Time for Urgent Reform that laid out a plan of action to make the Commonwealth effective and relevant. He was Antigua and Barbuda's nominee to be secretary general of the Commonwealth at the election held at the 2015 Commonwealth Heads of Government Meeting. He is a senior research fellow at the Institute of Commonwealth Studies, University of London, and is a speaker at conventions and conferences on global financial services issues and on Caribbean states in the political-economy of the Americas and the Commonwealth.

Other Resources About Ronald Sanders

What Schools Are Affiliated With Ronald Sanders ?

Ronald Sanders is affiliated with the following schools: