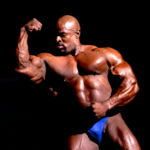 Why Is Ronnie Coleman Influential?

According to Wikipedia, Ronnie Dean Coleman is an American retired professional bodybuilder. The winner of the Mr. Olympia title for eight consecutive years, he is widely regarded as either 'the greatest' or one of the two greatest bodybuilders of all time along-with Arnold Schwarzenegger and as the most dominant bodybuilding physique ever to grace the stage. Winner of 26 IFBB professional titles, he is also renowned for his combination of size and conditioning, dominant body-parts and extremely heavy workouts, making him the strongest bodybuilder and Mr. Olympia of all time.

Other Resources About Ronnie Coleman

What Schools Are Affiliated With Ronnie Coleman?

Ronnie Coleman is affiliated with the following schools: