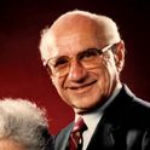 Why Is Rose Friedman Influential?

According to Wikipedia, Rose Director Friedman Biography Rose Friedman attended Reed College and then transferred to the University of Chicago, where she received a Bachelor of Philosophy degree. After this she began to study for a doctorate in economics at the University of Chicago and completed all work necessary for the Ph.D. except for writing the dissertation. In her youth, she wrote articles with Dorothy Brady on consumption. She received an honorary LL.D. in December 1986 from Pepperdine University. She is believed to have been born the last week of December, 1910; however, the birth records have been lost. She was born in Staryi Chortoryisk, in Ukraine, to the Director family, prominent Jewish residents.

Other Resources About Rose Friedman

What Schools Are Affiliated With Rose Friedman?

Rose Friedman is affiliated with the following schools: