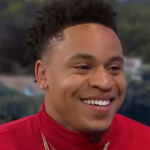 Why Is Rotimi Influential?

According to Wikipedia, Olurotimi Akinosho , known professionally as Rotimi, is an American actor and singer. He is known for his role as Darius Morrison on the Starz series Boss, and as Andre Coleman on Power. Early life and education Rotimi was born in Maplewood, New Jersey, to Nigerian parents; his father an investment banker of Yoruba origin and his mother of Igbo origin, working for the government. He attended Columbia High School, where he was on both the varsity basketball team and the choir. He continued his studies at Northwestern University and graduated with a bachelor's degree in Communication with a minor in Business in 2010.

Other Resources About Rotimi