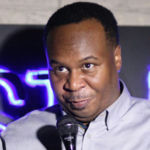 Why Is Roy Wood Jr. Influential?

According to Wikipedia, Roy Norris Wood Jr. is an American humorist, comedian, radio personality, actor, producer, podcaster, and writer. He has served as a correspondent for The Daily Show on Comedy Central since 2015. Early life and education Wood was born in Manhattan, New York City, New York. His father, Roy Wood Sr., was a Birmingham, Alabama radio broadcasting and journalism pioneer who covered the civil rights movement; the racism encountered by African-American soldiers in the Vietnam War; the Soweto uprising; and the Rhodesian Bush War, among other topics. His mother is Joyce Dugan Wood, a college administrator. His paternal three times great-grandfather, Sam Wood, was born c. 1790 in Africa. His parents separated for a time, and Wood lived with his mother in Memphis, Tennessee. When Wood was in the second grade, his parents reconciled, so the family moved to Birmingham; they lived on South Park Road in Birmingham's West End neighborhood. His half-brother is Roy L. Wood, a news anchor.

Other Resources About Roy Wood Jr.

What Schools Are Affiliated With Roy Wood Jr.?

Roy Wood Jr. is affiliated with the following schools: