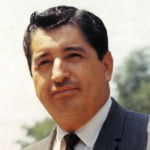 Why Is Ruben Salazar Influential?

According to Wikipedia, Ruben Salazar was a civil rights activist and a reporter for the Los Angeles Times, the first Mexican-American journalist from mainstream media to cover the Chicano community. Salazar was killed during the National Chicano Moratorium March against the Vietnam War on August 29, 1970, in East Los Angeles, California. During the march, Salazar was struck and immediately killed by a tear-gas projectile fired by Los Angeles County Sheriff's deputy Thomas Wilson. No criminal charge was filed, but Salazar's family reached an out-of-court financial settlement with the county.

Other Resources About Ruben Salazar

What Schools Are Affiliated With Ruben Salazar?

Ruben Salazar is affiliated with the following schools: