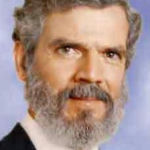 Why Is Rudolph Rummel Influential?

According to Wikipedia, Rudolph Joseph Rummel was an American political scientist and professor at the Indiana University, Yale University, and University of Hawaiʻi. He spent his career studying data on collective violence and war with a view toward helping their resolution or elimination. Contrasting genocide, Rummel coined the term democide for murder by government, such as the genocide of indigenous peoples and colonialism, Nazi Germany, the Stalinist purges, Mao Zedong's Cultural Revolution, and other authoritarian, totalitarian, or undemocratic regimes, coming to the conclusion that democratic regimes result in the least democides.

Other Resources About Rudolph Rummel

What Schools Are Affiliated With Rudolph Rummel?

Rudolph Rummel is affiliated with the following schools: