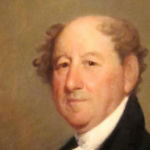 Why Is Rufus King Influential?

According to Wikipedia, Rufus King was an American Founding Father, lawyer, politician, and diplomat. He was a delegate for Massachusetts to the Continental Congress and the Philadelphia Convention and was one of the signers of the United States Constitution in 1787. After formation of the new Congress he represented New York in the United States Senate. He emerged as a leading member of the Federalist Party, serving as the party's last presidential nominee in the 1816 presidential election.

Other Resources About Rufus King

What Schools Are Affiliated With Rufus King?

Rufus King is affiliated with the following schools: