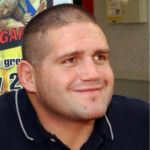 Why Is Rulon Gardner Influential?

According to Wikipedia, Rulon Ellis Gardner is an American retired Greco-Roman Olympic Gold Medalist wrestler. He competed at the 2000 and 2004 Olympics and won the gold medal in 2000, defeating Russia's three-time reigning gold medalist Aleksandr Karelin in the final. Karelin was previously unbeaten for 13 years in international competition. Gardner won a bronze medal at the 2004 Games.

Other Resources About Rulon Gardner

What Schools Are Affiliated With Rulon Gardner?

Rulon Gardner is affiliated with the following schools: