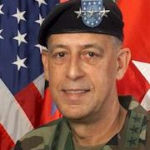 Why Is Russel L. Honoré Influential?

According to Wikipedia, Russel L. Honoré is a retired lieutenant general who served as the 33rd commanding general of the U.S. First Army at Fort Gillem, Georgia. He is best known for serving as commander of Joint Task Force Katrina responsible for coordinating military relief efforts for Hurricane Katrina–affected areas across the Gulf Coast and as the 2nd Infantry Division's commander while stationed in South Korea. He served until his retirement from the Army on January 11, 2008. Honoré is sometimes known as "The Ragin' Cajun".

Other Resources About Russel L. Honoré

What Schools Are Affiliated With Russel L. Honoré?

Russel L. Honoré is affiliated with the following schools: