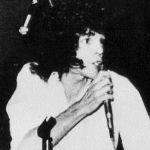 American musician, member of the Sparks

Why Is Russell Mael Influential?

According to Wikipedia, Russell Craig Mael is an American singer best known as the lead singer for the band Sparks which he formed in 1971 with his elder brother Ron Mael. Mael is known for his wide vocal range, in particular his far-reaching falsetto. He has a flamboyant and hyperactive stage presence which contrasts sharply with Ron Mael's deadpan scowling. The band released an album with British rock band Franz Ferdinand, as the supergroup FFS, titled FFS, released in 2015. The Mael brothers are the founders of Lil' Beethoven Records.

Other Resources About Russell Mael

What Schools Are Affiliated With Russell Mael?

Russell Mael is affiliated with the following schools: