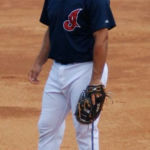 Why Is Ryan Garko Influential?

According to Wikipedia, Ryan Francis Garko is a former professional baseball outfielder, first baseman, and designated hitter. In college, he was a catcher. He played for the Cleveland Indians, the San Francisco Giants, and the Texas Rangers in Major League Baseball as well as the Samsung Lions in the Korea Baseball Organization. Garko was seen by former ESPN reporter John Sickels as a good hitter who hit to all parts of the field, but with poor defensive instincts. Through 2010, he had a .275 career average, 427 hits, 55 home runs, and 250 RBI in 463 games.

Other Resources About Ryan Garko

What Schools Are Affiliated With Ryan Garko?

Ryan Garko is affiliated with the following schools: