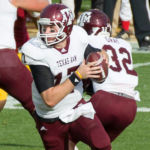 Why Is Ryan Tannehill Influential?

According to Wikipedia, Ryan Timothy Tannehill III is an American football quarterback for the Tennessee Titans of the National Football League . He played college football at transitioning from wide receiver to the team's starting quarterback. He was drafted eighth overall by the Miami Dolphins in the 2012 NFL Draft.

Other Resources About Ryan Tannehill

What Schools Are Affiliated With Ryan Tannehill?

Ryan Tannehill is affiliated with the following schools: