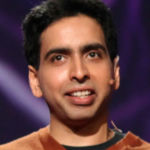 Why Is Sal Khan Influential?

According to Wikipedia, Salman Amin Khan , known as Sal Khan, is an American educator and the founder of Khan Academy, a free online education platform and an organization with which he has produced over 6,500 video lessons teaching a wide spectrum of academic subjects, originally focusing on mathematics and sciences. He is also the founder of Khan Lab School, a brick-and-mortar school associated with Khan Academy.

Other Resources About Sal Khan

What Schools Are Affiliated With Sal Khan?

Sal Khan is affiliated with the following schools: