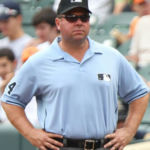 Why Is Sam Holbrook Influential?

According to Wikipedia, Samuel Woodford Holbrook is an American umpire in Major League Baseball . He made his MLB debut in 1996 and became a crew chief in 2017. Holbrook wears number 34. Umpiring career Sam Holbrook began his umpiring career in the Appalachian League in 1990, followed by stints in the Midwest, Carolina, Texas, Eastern and International Leagues before making his Major League debut in June, 1996. Holbrook worked the 1996 season in the American League, followed by three seasons in the National League. In 1999, he was one of 22 umpires whose resignations were accepted , and was rehired in 2002, umpiring games in both Major Leagues since then. Holbrook has umpired in six Division Series , four League Championship Series , and three World Series . He also officiated the 2004 MLB All-Star Game. Holbrook was named a crew chief in February 2017 by MLB. He is joined on his 2017 crew by Greg Gibson, Jim Wolf and D.J. Reyburn.

Other Resources About Sam Holbrook

What Schools Are Affiliated With Sam Holbrook?

Sam Holbrook is affiliated with the following schools: