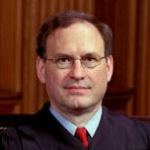 Why Is Samuel Alito Influential?

According to Wikipedia, Samuel Anthony Alito Jr. is an American lawyer and jurist who serves as an associate justice of the Supreme Court of the United States. He was nominated by President George W. Bush on October 31, 2005, and has served since January 31, 2006. He is the second Italian-American justice to serve on the Supreme Court, after Antonin Scalia, and the eleventh Roman Catholic.

Other Resources About Samuel Alito