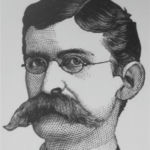 Why Is Samuel W. Small Influential?

According to Wikipedia, Samuel White "Sam" Small was a journalist, Methodist evangelist, and prohibitionist. Youth Small was born on a plantation near Knoxville, Tennessee, the son of Alexander B. Small, a newspaper editor and president of an express company. Small later said of his childhood that he was "well born … given by kindly parents all the true and religious culture that a boy could have in a loving home." At thirteen Small enlisted in the reserves of the Confederate Army during the last months of the war. He graduated from high school in New Orleans and then attended Emory & Henry College, graduating in 1871. He immediately began a career in journalism even while toying with becoming a lawyer. In 1873, he married Annie Isabelle Arnold, and they had a daughter and two sons.

Other Resources About Samuel W. Small

What Schools Are Affiliated With Samuel W. Small?

Samuel W. Small is affiliated with the following schools: