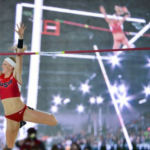 Why Is Sandi Morris Influential?

According to Wikipedia, Sandi Morris is an American pole vault record holder. She won the silver medal in the pole vault event at the 2016 Summer Olympics. She also won silver at the pole vault event at the 2017 World Championships in Athletics and another silver at the 2019 World Championships in Athletics. In 2018 she won gold at the World Indoor Championships. Morris has a personal best vault of indoor, set on March 12, 2016 in Portland, Oregon. She matched this height at the 2018 World Indoor Champships when setting a new championship record. July 23, 2016, Morris cleared at American Track League in Houston at Rice University breaking Jennifer Suhr's American outdoor record in the pole vault. Morris cleared at 2016 IAAF Diamond League Memorial Van Damme in Brussels on September 9, 2016 to set the U.S. women's outdoor pole vault record.

Other Resources About Sandi Morris

What Schools Are Affiliated With Sandi Morris?

Sandi Morris is affiliated with the following schools: