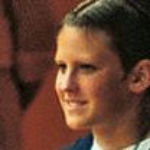 Why Is Sandy Neilson Influential?

According to Wikipedia, Sandra Lynn Neilson , also known by her married name Sandy Bell, is an American former competition swimmer, three-time Olympic gold medalist, and former world record-holder. Amateur career Neilson won her only Amateur Athletic Union national championship in 1971 in the 100-yard freestyle. While a student at El Monte High School, Neilson set CIF Southern Section records in 1972 for both the 50-yard and 100-yard freestyle events. She later attended University of California, Santa Barbara, where she was a member of the UCSB Gauchos swim team and a three-time All-American. In 1977, she won both the Association for Intercollegiate Athletics for Women 50-yard and 100-yard freestyle national championships.

Other Resources About Sandy Neilson

What Schools Are Affiliated With Sandy Neilson?

Sandy Neilson is affiliated with the following schools: