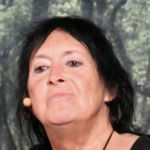 Why Is Sandy Stone Influential?

According to Wikipedia, Allucquére Rosanne "Sandy" Stone is an American academic theorist, media theorist, author, and performance artist. She is currently Associate Professor and Founding Director of the Advanced Communication Technologies Laboratory and the New Media Initiative in the department of Radio-TV-Film at the University of Texas at Austin. Concurrently she is Wolfgang Kohler Professor of Media and Performance at the European Graduate School EGS, senior artist at the Banff Centre, and Humanities Research Institute Fellow at the University of California, Irvine. Stone has worked in and written about film, music, experimental neurology, writing, engineering, and computer programming. Stone is transgender and is considered a founder of the academic discipline of transgender studies. She has been profiled in ArtForum, Wired, Mondo 2000, and other publications, and been interviewed for documentaries like Traceroute.

Other Resources About Sandy Stone

What Schools Are Affiliated With Sandy Stone ?

Sandy Stone is affiliated with the following schools: