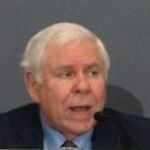 Why Is Sanford Levinson Influential?

According to Wikipedia, Sanford Victor Levinson is an American legal scholar known for his writings on constitutional law. A professor at the University of Texas Law School, Levinson is notable for his criticism of the United States Constitution as well as excessive presidential power and has been widely quoted on such topics as the Second Amendment, gay marriage, nominations to the Supreme Court, and other legal issues. He has called for a Second Constitutional Convention of the United States.

Other Resources About Sanford Levinson

What Schools Are Affiliated With Sanford Levinson?

Sanford Levinson is affiliated with the following schools: