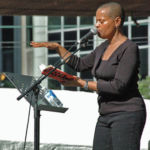 Why Is Sapphire Influential?

According to Wikipedia, Ramona Lofton , better known by her pen name Sapphire, is an American author and performance poet. Early life Ramona Lofton was born in Fort Ord, California, one of four children of an Army couple who relocated within the United States and abroad. After a disagreement concerning where the family would settle, her parents separated, with Lofton's mother "kind of abandoning them". Lofton dropped out of high school and moved to San Francisco, where she attained a GED and enrolled at the City College of San Francisco before dropping out to become a "hippie". In the mid-1970s Lofton attended the City College of New York and obtained an MFA degree at Brooklyn College. Lofton held various jobs before starting her writing career, working as a performance artist as well as a teacher of reading and writing.

Other Resources About Sapphire

What Schools Are Affiliated With Sapphire ?

Sapphire is affiliated with the following schools: