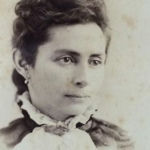 Why Is Sara Plummer Lemmon Influential?

According to Wikipedia, Sara Allen Plummer was an American botanist and the wife of California botanist John Gill Lemmon. Mount Lemmon in Arizona is named for her, as she was the first white woman to ascend it. She was responsible for the designation of the golden poppy as the state flower of California, in 1903. A number of plants are also named in her honor, including the new genus Plummera , described by Harvard University botanist Asa Gray in 1882.

Other Resources About Sara Plummer Lemmon

What Schools Are Affiliated With Sara Plummer Lemmon?

Sara Plummer Lemmon is affiliated with the following schools: