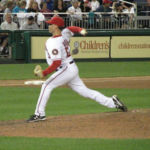 Why Is Saúl Rivera Influential?

According to Wikipedia, Rabell Saúl Rivera is a Puerto Rican former professional baseball pitcher. He played in Major League Baseball for the Washington Nationals and Arizona Diamondbacks. Career Minnesota Twins Rivera attended the University of Mobile, and was drafted in the ninth round of the 1998 Major League Baseball draft by the Minnesota Twins. He was assigned to the Elizabethton Twins after signing. He was promoted to the Quad Cities River Bandits in 1999, where he would spend the season. In 2000, he began the season with the advanced Single-A Fort Myers Miracle before receiving a promotion to the Double-A New Britain Rock Cats. He would spend the 2001 season with New Britain, pitching in 33 games for the club. He was added to the Twins roster in the offseason.

Other Resources About Saúl Rivera

What Schools Are Affiliated With Saúl Rivera?

Saúl Rivera is affiliated with the following schools: