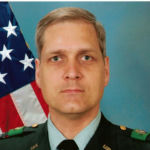 Soldier, engineer and inventor from the USA

Why Is Scott Haraburda Influential?

According to Wikipedia, Scott Stanley Haraburda is an American soldier, engineer, inventor, and 2nd dan judoka. In addition to making key contributions to the development of heat exchangers and spacecraft propulsion, he led a team of military officers in 2007 to Kuwait to correct many of the contingency contracting problems identified by the Gansler Commission. He is known nationally as the president of the Indiana Society of Professional Engineers who led the opposition to a state governmental panel recommendation in 2015 to eliminate licensing of engineers in Indiana.

Other Resources About Scott Haraburda

What Schools Are Affiliated With Scott Haraburda?

Scott Haraburda is affiliated with the following schools: