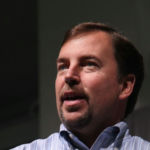 Why Is Scott Thompson Influential?

According to Wikipedia, Scott Thompson is an American businessman, and currently CEO of Tuition.io. Previously, he was chief executive officer of ShopRunner. Early life and education Thompson was born November 13, 1957, in Taunton, Massachusetts, and grew up in nearby Raynham. He was an accounting major from Stonehill College, a private Catholic school in Easton, Massachusetts.

Other Resources About Scott Thompson

What Schools Are Affiliated With Scott Thompson ?

Scott Thompson is affiliated with the following schools: