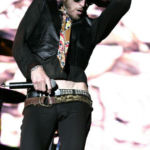 Why Is Scott Weiland Influential?

According to Wikipedia, Scott Richard Weiland was an American singer and songwriter. During a career spanning three decades, Weiland was best known as the lead singer of the rock band Stone Temple Pilots from 1989 to 2002 and 2008 to 2013, making six records with them. He was also lead vocalist of supergroup Velvet Revolver from 2003 to 2008, recording two albums, and recorded one album with another supergroup, Art of Anarchy. Weiland established himself as a solo artist as well and collaborated with several other musicians throughout his career.

Other Resources About Scott Weiland

What Schools Are Affiliated With Scott Weiland?

Scott Weiland is affiliated with the following schools: