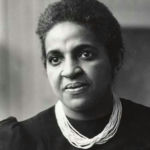 Why Is Selma Burke Influential?

According to Wikipedia, Selma Hortense Burke was an American sculptor and a member of the Harlem Renaissance movement. Burke is best known for a bas relief portrait of President Franklin D. Roosevelt that may have inspired the profile found on the obverse of the dime. She described herself as "a people's sculptor" and created many pieces of public art, often portraits of prominent African-American figures like Duke Ellington, Mary McLeod Bethune and Booker T. Washington. In 1979, she was awarded the Women's Caucus for Art Lifetime Achievement Award She summed up her life as an artist, "I really live and move in the atmosphere in which I am creating" .

Other Resources About Selma Burke

What Schools Are Affiliated With Selma Burke?

Selma Burke is affiliated with the following schools: