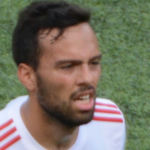 Why Is Sergio Camargo Influential?

According to Wikipedia, Sergio Andres Camargo Peñaranda is a Canadian professional soccer player who plays as a midfielder for Cavalry FC in the Canadian Premier League. Club career Toronto FC In 2009, Camargo went on trial with Vitória de Guimarães in Portugal and was offered a contract, however, because of a FIFA regulation that would have required his parents to move to Portugal in order to be allowed to play for the club, he was unable to join the team. Instead, he returned to Canada and joined Toronto FC.

Other Resources About Sergio Camargo

What Schools Are Affiliated With Sergio Camargo?

Sergio Camargo is affiliated with the following schools: