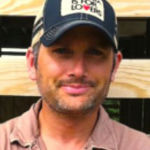 Why Is Seth Clabough Influential?

According to Wikipedia, Seth Clabough is an American fiction writer and author of the novel All Things Await, which was nominated for the 2017 Library of Virginia Literary Award for Fiction. Clabough was born in Richmond, Virginia in 1982, grew up on a farm in Appomattox County, Virginia, and has lived in Hawaii, Costa Rica, and the UK. Clabough's work has been published in anthologies, journals, and magazines ranging from Blackbird: an online journal of literature & the arts and Aesthetica magazine to The Chronicle of Higher Education and New Writing: the International Journal for the Practice and Theory of Creative Writing. He has literary representation through Inkwell Management in New York and currently works at Randolph–Macon College as an English professor and Director of the Communication Center after holding similar positions at Sweet Briar College and Longwood University.

Other Resources About Seth Clabough

What Schools Are Affiliated With Seth Clabough?

Seth Clabough is affiliated with the following schools:

What Are Seth Clabough's Academic Contributions?

Seth Clabough has made the following academic contributions: