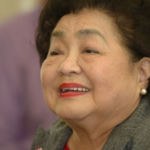 Why Is Setsuko Thurlow Influential?

According to Wikipedia, Setsuko Thurlow, born Setsuko Nakamura, is a Japanese–Canadian nuclear disarmament campaigner and Hibakusha who survived the atomic bombing of Hiroshima on 6 August 1945. She is mostly known throughout the world for being a leading figure of the International Campaign to Abolish Nuclear weapons and to have given the acceptance speech for its reception of the 2017 Nobel peace prize.

Other Resources About Setsuko Thurlow

What Schools Are Affiliated With Setsuko Thurlow?

Setsuko Thurlow is affiliated with the following schools: