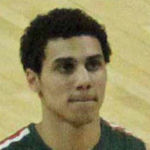 Why Is Shane Larkin Influential?

According to Wikipedia, DeShane Davis Larkin is an American-born naturalized Turkish professional basketball player for Anadolu Efes of the Turkish Basketball Super League and the EuroLeague. His great grandfather was from Bursa. He also represents the senior Turkish national team in international competition. He played college basketball for the University of Miami. He was selected by the Atlanta Hawks with the 18th overall pick in the 2013 NBA draft, where he was immediately traded to the Dallas Mavericks. He last played in the NBA in 2018 with the Boston Celtics. Larkin is the son of Hall of Fame baseball player Barry Larkin.

Other Resources About Shane Larkin

What Schools Are Affiliated With Shane Larkin?

Shane Larkin is affiliated with the following schools: