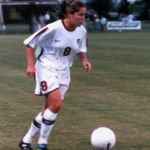 Why Is Shannon MacMillan Influential?

According to Wikipedia, Shannon Ann MacMillan is an American retired soccer player, coach, FIFA Women's World Cup champion, Olympic gold and silver medalist. Named U.S. Soccer Athlete of the Year for 2002, MacMillan played for the United States women's national soccer team from 1994 to 2006 and was part of the 1999 FIFA Women's World Cup-winning team . She won gold with the team at the 1996 Summer Olympics and silver at the 2000 Summer Olympics.

Other Resources About Shannon MacMillan

What Schools Are Affiliated With Shannon MacMillan?

Shannon MacMillan is affiliated with the following schools: