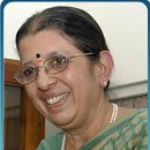 Why Is Shanthi Ranganathan Influential?

According to Wikipedia, Shanthi Ranganathan is an Indian social worker and the founder of T. T. Ranganathan Clinical Research Foundation, a non governmental organization managing the TTK Hospital, a medical centre based in Chennai for the treatment and rehabilitation of drug and alcohol addicts. She is the first recipient of the UN Vienna Civil Society Award and a recipient of the 1992 Padma Shri, the fourth highest civilian award from the Government of India for her contributions to the society.

Other Resources About Shanthi Ranganathan