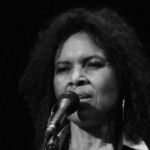 Why Is Sharon Robinson Influential?

According to Wikipedia, Sharon Robinson is an American singer, keyboardist, songwriter, and record producer. She is best known as a frequent writing collaborator with Leonard Cohen, although she has written songs for a number of other artists as well, including The Pointer Sisters, Aaron Neville, Brenda Russell, Diana Ross, Don Henley, Michael Bolton, Randy Crawford, Patti LaBelle, Roberta Flack, The Temptations, Bettye LaVette and others.

Other Resources About Sharon Robinson

What Schools Are Affiliated With Sharon Robinson ?

Sharon Robinson is affiliated with the following schools: