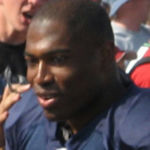 Why Is Shaun Alexander Influential?

According to Wikipedia, Shaun Edward Alexander is an American former professional football player who was a running back for the Seattle Seahawks and Washington Redskins of the National Football League . He played college football for the Alabama Crimson Tide, and was drafted by the Seattle Seahawks 19th overall in the 2000 NFL Draft. In May 2011, he was inducted into the Alabama Sports Hall of Fame.

Other Resources About Shaun Alexander

What Schools Are Affiliated With Shaun Alexander?

Shaun Alexander is affiliated with the following schools: