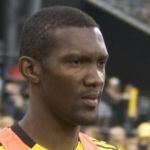 Why Is Shaun Francis Influential?

According to Wikipedia, Shaun Francis is a Jamaican footballer who last played for Louisville City FC in the USL Championship. Early life Personal Francis was born in Mandeville, Jamaica to Joy and Carlton Francis. He attended Glenmuir High School where he played soccer. While at Glenmuir he was an All-Island, Ben Francis Cup, and Dá Costa Cup Champion, as well as a member of an All-Conference Team.

Other Resources About Shaun Francis

What Schools Are Affiliated With Shaun Francis?

Shaun Francis is affiliated with the following schools: