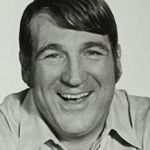 Why Is Shecky Greene Influential?

According to Wikipedia, Shecky Greene is an American comedian. He is known for his nightclub performances in Las Vegas, Nevada, where he became a headliner in the 1950s and '60s. He has appeared in several films, including Tony Rome; History of the World, Part I; and Splash. In television, he has guest-starred on such television shows as Love, American Style and Combat!, and later Laverne & Shirley and Mad About You.

Other Resources About Shecky Greene

What Schools Are Affiliated With Shecky Greene?

Shecky Greene is affiliated with the following schools: