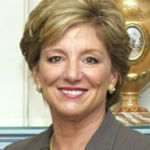 Why Is Sheri McCoy Influential?

According to Wikipedia, Sherilyn S. McCoy is an American scientist and business executive. She is the former CEO of Avon Products and former vice chairman and member of the office of the chairman of Johnson & Johnson, where she was responsible for the pharmaceutical and consumer business divisions of the company. She was appointed as the vice chairman in January 2011, after which she was named by Fortune Magazine, as the 10th woman on their list of "50 Most Powerful Women in Business", a list on which she has been included since 2008. In February 2012, she resigned her employment with Johnson & Johnson after 30 years and was subsequently named as the CEO of Avon Products. In August 2012, she was recognized as the 39th most powerful woman in the world by Forbes Magazine.

Other Resources About Sheri McCoy

What Schools Are Affiliated With Sheri McCoy?

Sheri McCoy is affiliated with the following schools: