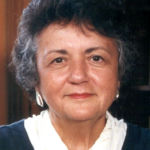 Why Is Shirley Abrahamson Influential?

According to Wikipedia, Shirley Schlanger Abrahamson was the 25th chief justice of the Wisconsin Supreme Court. An American lawyer and jurist, she was appointed to the court in 1976 by Governor Patrick Lucey, becoming the first female justice to serve on Wisconsin's highest court. She became the court's first female chief justice on August 1, 1996, and served in that capacity until April 29, 2015. In all, she served on the court for 43 years , making her the longest-serving justice in the history of the Wisconsin Supreme Court.

Other Resources About Shirley Abrahamson

What Schools Are Affiliated With Shirley Abrahamson?

Shirley Abrahamson is affiliated with the following schools: