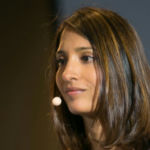 Why Is Shivani Siroya Influential?

According to Wikipedia, Shivani Siroya is the founder and chief executive officer of Tala, a smartphone lending app. She founded the app in 2011 to offer instant credit scores to people in underrepresented markets such as Kenya, Tanzania, India, and the Philippines. The app also acts as a lender and has granted more than $225M in microloans as of 2018.

Other Resources About Shivani Siroya

What Schools Are Affiliated With Shivani Siroya?

Shivani Siroya is affiliated with the following schools: