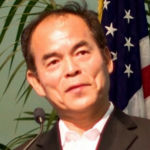 Inventor of the blue LED, 2014 Nobel laureate in Physics

Why Is Shuji Nakamura Influential?

Shuji Nakamura currently holds the title of Professor at the Materials Department of the College of Engineering, University of California, Santa Barbara. Nakamura completed his bachelor’s in electronic engineering at University of Tokushima in 1977, and his master’s in 1979, after which Nakamura went immediately into engineering in private industry.

Nakamura is best known as the inventor of blue and white light-emitting diodes (LEDs). More than just bright, these LEDs are highly-efficient light sources, and the commercialization of this invention is allowing for consumers and corporations the world over to reduce their energy consumption. The road to this invention, however, was not easy. Much of Nakamura’s career through the 1980s was spent refining LEDs to make a blue LED that was both functional and marketable; it was not completed until 1993.

For his work, Nakamura has received numerous awards and honors, including a Nobel Prize in Physics for his role in inventing blue-light LEDs, a Global Energy Prize, a Benjamin Franklin Medal in Physics, a Harvey Prize, and a Mountbatten Medal.

According to Wikipedia, Shuji Nakamura is a Japanese-born American electronic engineer and prolific inventor specializing in the field of semiconductor technology, professor at the Materials Department of the College of Engineering, University of California, Santa Barbara , and is regarded as the inventor of the blue LED, a major breakthrough in lighting technology.

Other Resources About Shuji Nakamura

What Schools Are Affiliated With Shuji Nakamura?

Shuji Nakamura is affiliated with the following schools: