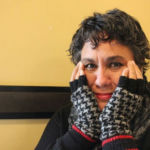 Why Is Sia Figiel Influential?

According to Wikipedia, Sia Figiel is an American contemporary Samoan novelist, poet, and painter. Early life Sia Figiel grew up amidst traditional Samoan singing and poetry, which heavily influenced her writing. Figiel's greatest influence and inspiration in her career is the Samoan novelist and poet, Albert Wendt. Her formal schooling was conducted in Samoa and New Zealand where she also began a Bachelor of Arts, which was later completed at Whitworth College . She travelled in Europe and completed writers' residencies at the University of the South Pacific, Suva, and the University of Technology, Sydney.

Other Resources About Sia Figiel

What Schools Are Affiliated With Sia Figiel?

Sia Figiel is affiliated with the following schools: