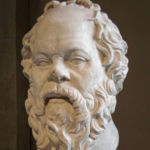 Why Is Socrates Influential?

According to Wikipedia, Socrates was a Greek philosopher from Athens who is credited as a founder of Western philosophy. An enigmatic figure, Socrates authored no texts and is known mainly through the posthumous accounts of classical writers, particularly his students Plato and Xenophon. These accounts are written as dialogues, in which Socrates and his interlocutors examine a subject in the style of question and answer; they gave rise to the Socratic dialogue literary genre. Contradictory accounts of Socrates make a reconstruction of his philosophy nearly impossible, a situation known as the Socratic problem. Socrates was a polarizing figure in Athenian society. In 399 BC, he was accused of impiety and corrupting the youth. After a trial that lasted a day, he was sentenced to death. He spent his last day in prison, refusing offers to help him escape.

Other Resources About Socrates