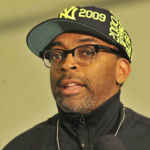 Why Is Spike Lee Influential?

According to Wikipedia, Shelton Jackson "Spike" Lee is an American film director, producer, screenwriter, and actor. His production company, 40 Acres and a Mule Filmworks, has produced more than 35 films since 1983. He made his directorial debut with She's Gotta Have It . He has since written and directed such films as School Daze , Do the Right Thing , Mo' Better Blues , Jungle Fever , Malcolm X , Crooklyn , Clockers , 25th Hour , Inside Man , Chi-Raq , BlacKkKlansman and Da 5 Bloods . Lee also acted in eleven of his feature films. His films have featured breakthrough and acclaimed performances from actors such as Denzel Washington, Laurence Fishburne, Samuel L. Jackson, Giancarlo Esposito, Rosie Perez, Delroy Lindo and John David Washington.

Other Resources About Spike Lee

What Schools Are Affiliated With Spike Lee?

Spike Lee is affiliated with the following schools: