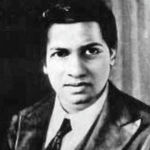 Why Is Srinivasa Ramanujan Influential?

According to Wikipedia, Srinivasa Ramanujan was an Indian mathematician who lived during the British Rule in India. Though he had almost no formal training in pure mathematics, he made substantial contributions to mathematical analysis, number theory, infinite series, and continued fractions, including solutions to mathematical problems then considered unsolvable. Ramanujan initially developed his own mathematical research in isolation: according to Hans Eysenck: "He tried to interest the leading professional mathematicians in his work, but failed for the most part. What he had to show them was too novel, too unfamiliar, and additionally presented in unusual ways; they could not be bothered". Seeking mathematicians who could better understand his work, in 1913 he began a postal correspondence with the English mathematician G. H. Hardy at the University of Cambridge, England. Recognising Ramanujan's work as extraordinary, Hardy arranged for him to travel to Cambridge. In his notes, Hardy commented that Ramanujan had produced groundbreaking new theorems, including some that "defeated me completely; I had never seen anything in the least like them before", and some recently proven but highly advanced results.

Other Resources About Srinivasa Ramanujan

What Schools Are Affiliated With Srinivasa Ramanujan?

Srinivasa Ramanujan is affiliated with the following schools: