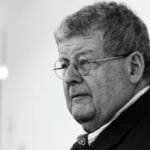 Why Is Stanley Tigerman Influential?

According to Wikipedia, Stanley Tigerman was an American architect, theorist and designer. Biography Early years Tigerman was born into a Jewish family, the only child of Emma , a typist for the federal government, and Samuel Tigerman, an engineer whose career struggled by the Depression. He grew up in his paternal grandparents' boardinghouse in Edgewater, Chicago. He won the 'beautiful baby' contest at the 1933 World's Fair. When he was a child, he wanted to be a musician and took six years of piano lessons. At Senn High School he studied jazz.

Other Resources About Stanley Tigerman

What Schools Are Affiliated With Stanley Tigerman?

Stanley Tigerman is affiliated with the following schools: